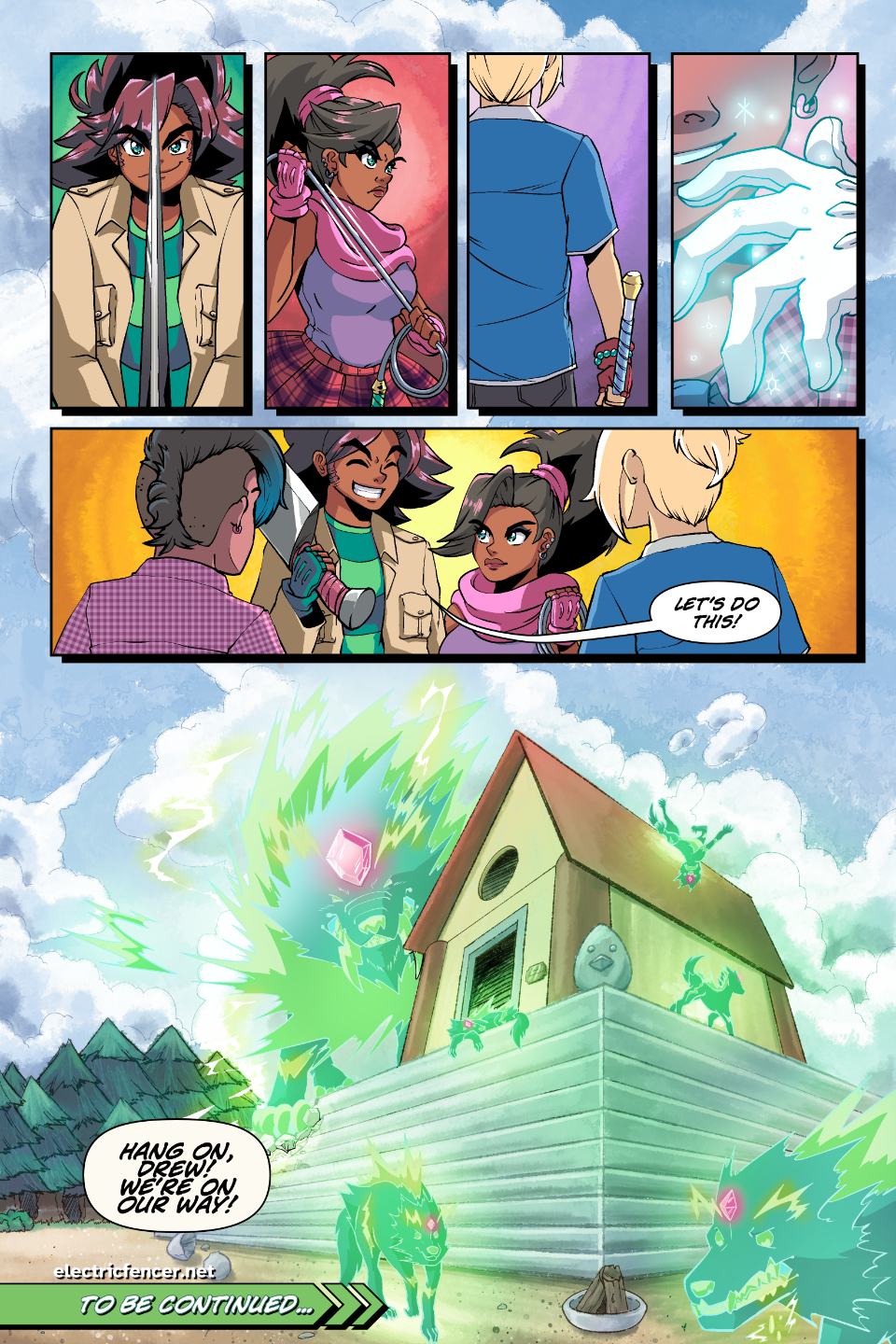 My day job has been keeping me busy, as well as commissions. I’ve actually been suffering from a slight bit of burnout from these two things, but even worse, I’ve been dealing with creative constipation in the sense that I really want to work on Electric Fencer content that will push the story forward, but I’ve had a ton of other responsibilities that have set me back. Mental health has also taken something of an asswhooping these last few months so all I’ve really wanted to do was sleep or play video games. I got back into World of Warcraft, which has been a lot of fun. If only a soul-sucking timesink could help get comics done…

So while I haven’t been as active in this space the last few months as I’d like, I do have some excellent news: I have an appearance this month at the West Virginia Pop Culture Convention (WVPopCon) from August 27th to the 28th! During our appearance at 3 Rivers Comicon back in early June, the showrunner for WVPopCon approached us and invited us to purchase a booth at the event. We’ll be there with books, stickers, buttons, prints, and the like for sale.

Speaking of books, we’ve begun printing hard copies of Issue 1 to sell at conventions. We’re still figuring out what we’ll do to make them available for sale through the site. Big shout out to the mad lads at Greko Printing and Comix Well Spring for always turning out super high quality prints for us in such a short time and just being super cool about it.

I’ve also been working on doodles and sketches moreso than I ever have in the past, and I’m thinking some of that will be coming forward in Issue 3. I’ve already informed our writer that I’d like to go with a simpler visual style than the ultra detailed shading we had before, and the results I’ve been toying with have been coming out pretty nicely. Have a look:

This means that Issue 3 is going to be restarted to employ the new art style as well as fix some minor inconsistencies brought about by the original way we were going about it. The goal is to still have something out by mid-late October at the absolute latest, but I’ll keep you all posted should things change. With this style, I’m hoping to be able to finish the art for each issue much more quickly than before.

I think that’s about all I have for now, but I hope to be back with more updates before long. See you then!

Best caption gets a high five at my next convention.

Speaking of which, I’ll be at 3 Rivers Comicon again this year from June 4-5. I was a late addition, but I’m glad to be there nonetheless. If you’re in the Pittsburgh area this weekend, come on by and say hi.

Hello! It’s been a minute. I’ve had public appearances and a lot of freelance to tend to over the past month, so it’s been a lot quieter here than I intended, but I finally have the first bit of supplemental material I promised. It’s a world map and with it comes a new article in the Extras section, It’s a Fairly Large World, After All. Unlike the other two articles, this one will be ongoing and info on new continents and nations will be added as we continue. Our first bit is a rundown of the continent of Laurentiis. Check it out.

Page 24 of Issue 2 has gone live, and with that, Issue 2 has come to a close. Thanks for following along thus far! Issue 3 is going to be great.

As previously mentioned, the comic itself is going to go dark for the next few months while I catch up on life stuff and progress on Issue 3. You’ve actually already seen a couple of shots of the next issue (the profile pictures for the distortion beasts are lifted from Issue 3). Here’s a few more, sans context:

As you can see, I went with slightly warmer, more vibrant colors and the characters are more expressive. This is actually the first issue of Electric Fencer that will be done 100% digitally. In previous years of my creative career, I started with traditional pencil and paper art, then scanned everything in and inked and colored the sketches. Switching to this method of production, I feel, has made for a more impactful and dynamic comic.

I’ll be back soon with more updates. Thanks for reading!

Last week, Page 22 went up and this week, the penultimate, Page 23 is up. We’re getting ready to give these electric dogboys the business.

With this, I think it’s also time to announce that the comic will be taking an extended break until later this year to catch up on real life work, commissions, and such. I’m aiming for somewhere between October and December…er…I mean August and October (the real world months, not the Electric Fencer ones) for the debut of Issue 3. I’ll have details closer to the date, but fret not, this space isn’t going to just be dead for the next four months. I have a number of updates planned, primarily aimed at content for the extras section, and some side content. Maybe a behind-the-scenes look at some things too. In the meantime, of course, Issue 3 will be worked on. I even have the first several pages ready.

For next week, Page 24 will go up and as a bonus, just to show you guys that I’m not just making shit up (as Elliott would put it), I’m also going to share some panels from the next issue to show you all what you can look forward to when we come back.

Until then, I’m going to get some very well-deserved rest.

Today on Page 20, we learn about distortion beasts. They look like giant magical eldritch good boys.

They’ve also been given their entry on the Characters page, with a bonus entry for Boss Distortion Beasts. We’ll be meeting these guys in proper soon. The characters page also received a slight change to how each character is numbered. Nothing big, but I foresee we may need the hundreds place for the number of characters at some point in the distant future.

Remember those strange green glowy things from page 22 of Issue 1?

They make a return today on page 19 and we get just a little bit more information about them. Page 18 also went up last week.

Issue 2 will be wrapping up soon and we’ve got some announcements of things coming to the site over the next few weeks coming soon. Stay tuned.

Page 17 is up and with it we finally have a name for our mystery woman: it’s Tarragon! She’s been added to the character page in full. Tarragon has also received a site banner, which will cycle with the other banners on the site, so be on the lookout for it as well.

Speaking of character banners, I added a new banner for Elliott, this time based on his design featured on Monday’s Valentines, however, I also added one for Magnus. He hasn’t made many appearances in the comics yet, but based on my discussions with fans of the series, he seems to be a favorite, so here’s a little something of a treat for them as well.

Normally I just let today pass right by, but not this year. I made custom Electric Fencer Valentines! Print them out and exchange them with your friends who might like anime-esque art from a weird webcomic with a weird pun for a name.

There’s also a very minor spoiler in here for Wednesday but I don’t think that’ll be too huge of an issue.

We’ve had some slow news days the last few weeks with regards to story progression, but we’ll be receiving some information of note next week. For now, here’s your official notice that Page 15 and Page 16 are up.

Kinda not sure what to do here for right now, but here’s Pearl and Steven tap dancing: